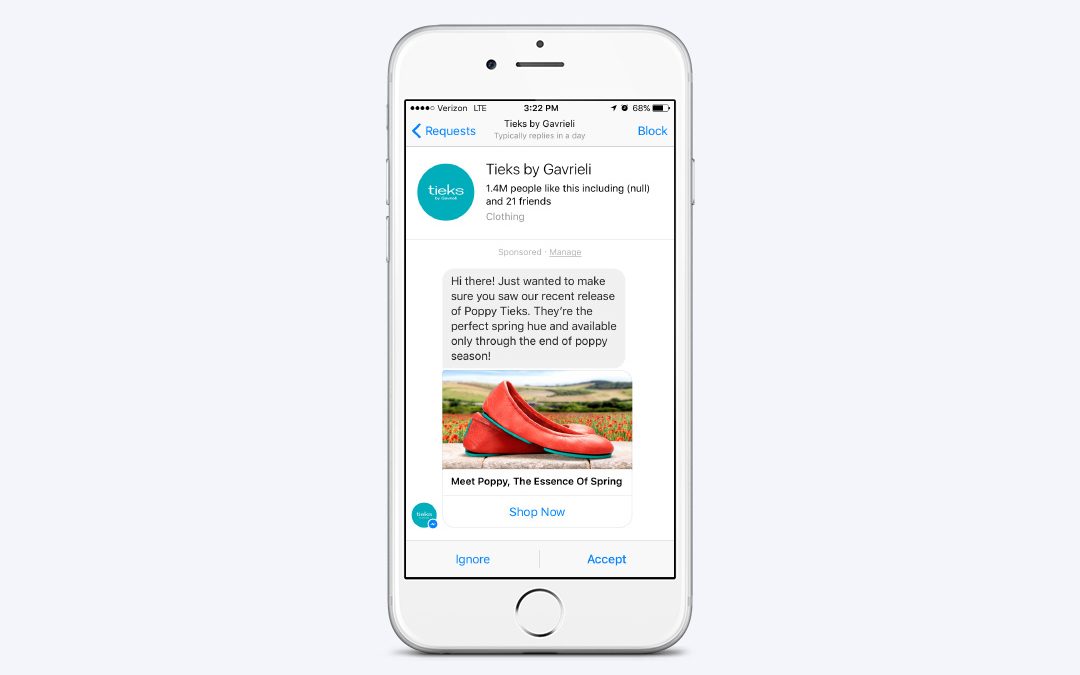 We’re all familiar with sponsored posts in our newsfeed. At H&A we have been responsible for a good number of ads on our clients’ behalf. But I encountered a new type of ad.

I received a new message in Facebook Messenger. I clicked in to see what a friend had sent me, and was greeted not by a hilarious meme or a hangout request, but by an ad.

I didn’t even recognize it as an ad at first. I thought, “Who is Tieks Gavrieli?,” completely missing the word ‘by’ (Tieks by Gavrieli) before tapping in.

Once I was in I immediately recognized the teal soles on the handmade ballet flats and knew it was an ad.

I shouldn’t have been surprised

Throughout April, Facebook has been touting Messenger Platform (Beta)’s ability to communicate with brands through messenger and bots for brands to feed information to potential customers when they request it. Facebook also announced a new customer matching feature and that Facebook News Feed ads will enable the opening of threads on Messenger. Tieks is even featured in their video touting everything people can do with Messenger.

When the ad showed up, I was more surprised than I should have been. Facebook is, of course, looking to make a profit. They’re making Messenger business-friendly. TechCrunch said the ads were coming. But the article also said, “Thankfully for users, Facebook isn’t going to let brands send ad messages to just anyone or even people who’ve liked their Pages. Only those who have voluntarily chatted with a business can be sent ads.” But I haven’t. I haven’t chatted with anyone at Tieks.

And it doesn’t stop there.

I’m certain I fit some sort of target demographic/buying group. Update: She said she has since received the ad. Maybe all signs still point to me based on my Internet history, or maybe it’s because I seem to be in one of Facebook’s early release groups; I can’t be sure. 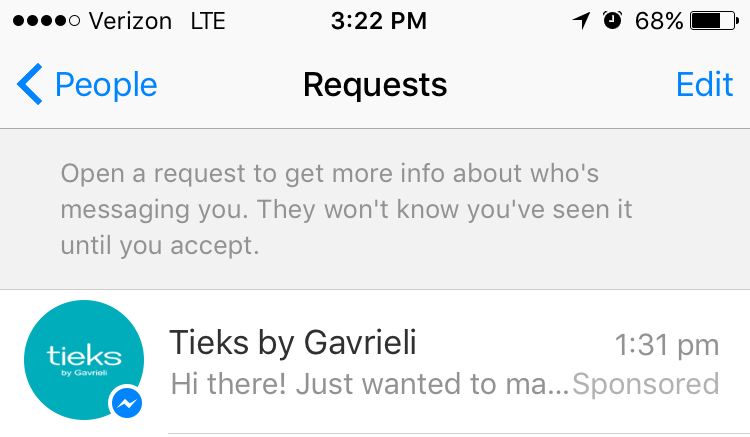 I should add, I could accept/ignore the ad or block Tieks by Gavrieli. When I went back to find the ad, I had to navigate to message requests to find it again, where it said, “sponsored,” and may have said that before I touched in the first time, I just didn’t know to look for it.

As a Messenger user

I don’t mind the ad, but would prefer if it didn’t make the little red notification pop up. I also don’t want to see my inbox flooded with ads.

As a PR and marketing professional

I’m thrilled the ad showed up in my inbox and can’t wait to test it out on the business end. I’ll definitely be looking to use it more strategically than was the case in this situation.

At H&A we’re always excited to see new PR and marketing tools come out and we can’t wait to play with them. If you’re looking for someone to help you with your social media marketing, look no further.