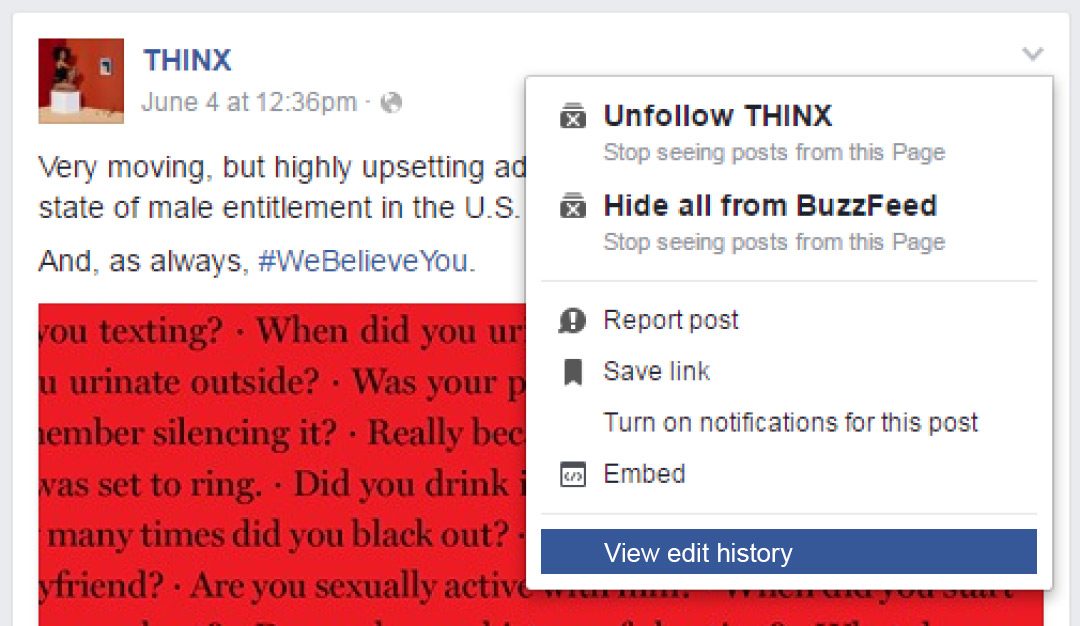 You’ve probably heard the story by now. An unconscious woman was sexually assaulted by a Stanford student. The survivor’s 17-page letter to the court read directly to Turner went viral. It’s been blowing up my newsfeed all last week, and possibly yours.

So why am I writing about this?

Often, brands attempt to latch on to current events as a means to stay relevant. Many times, they fall flat (Total Beauty confusing Whoopi Goldberg for Oprah at the Oscars, anyone?). Brands are going to fail on social media. People run social media accounts, and people, as we all know, are fallible. When it happens, everyone will be watching your response.

THINX, a brand known for making underwear for women with periods, has social media accounts full of posts related to women’s lives and clearly has a feminist leaning. It seems reasonable they would make a post about the viral Stanford sexual assault case.

The problem was that in the original post, THINX called for the name of the survivor. This upset a number of their followers interested in protecting the survivor’s identity (as she stated in her letter to the court that she didn’t want to be known in her hometown as the woman assaulted behind a dumpster).

In response, THINX edited the post and Miki, CEO and co-founder, took to the comments section. She made a general comment and responded to many individual comments directing them to her comment/essay. 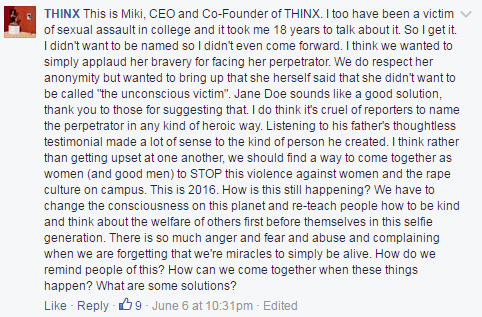 She also named her writer and said she had good intentions, but got it wrong.

I applaud THINX for trying to right their misstep. The CEO taking to the comments section does demonstrate a great deal of care and acknowledges that upsetting customers is not something the brand wants to do, but they could have done a couple of things better:

Apologize, don’t excuse. Writing a comment/essay apologizing but excusing your behavior is exactly what made the Stanford case go viral. Apologize for what went wrong and acknowledge why it was wrong, don’t excuse it. Just because a brand has good intentions doesn’t mean it isn’t in the wrong (good advice for life, too).

Don’t add insult to injury. By suggesting that rather than getting upset at each other that commenters should come together, it belittles the commenter’s point of view. Commenters were upset because they couldn’t come together with THINX on this topic and they thought they would be able to.

I also understand the desire to edit the post and take to the comments section and engage with your customers, but why not also make a separate post as an apology? Providing an apology in its own post shows not only the people who commented, but also others who saw the post and didn’t comment, that the brand listens and acknowledges when it does something wrong. This kind of attention goes a long way in demonstrating that a brand is committed to its mission. In THINX’s case, this is being in support of women.

Without a good plan in place, any social media misstep can have a big impact on customer relationships and business. If you need help coming up with a plan, get in touch. We’re happy to help.

We can help you with planning, execution, measurement and integration. To learn more about our social media and digital marketing services, call 515-224-1086.

Crisis? Opportunity? Something else entirely? Chances are we’ve helped our clients face something similar, so let’s talk about it. Confidentially, of course. Phone: 515-224-1086